It’s hard to believe that this content little face, captured yesterday, could cause so much drama today… 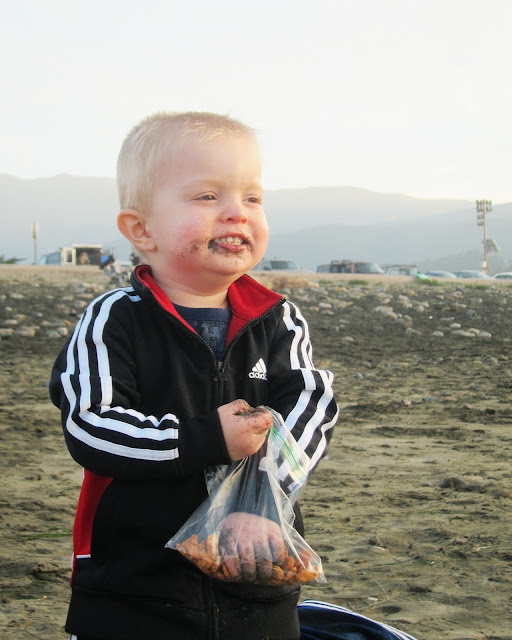 
Yesterday, we took the boys to the beach for the afternoon. It was a glorious January day, and although it’s never WARM at the beach here in northern California, it was pretty close to perfect by our standards. Considering how long it’s been since we made it out to the beach (it is January, after all), I was surprised that when Chase heard Ryan and I mention visiting the beach that afternoon, he latched on and spent the next hour running around the house saying, “Beach! Beach! Beach!” until we finally headed for the coast.


Once there, he was in paradise, having made it his mission to fill up his pail one handful of sand at a time.


The problem, however, started when he woke up in his crib this morning and immediately began asking us, “Beach? Beach?” Our consistent reply of “No, we’re going to church” did NOT fly. He would throw himself on the ground and continue demanding “Beach! Beach! BEACH!” His mood continued to deteriorate until we finally decided to see if he’d take a nap at 9:30am. (It has been at least six months since he had an official morning nap.) Trenton and I went late to church while Ryan stayed home with the sleeping monster.


Unfortunately, Chase’s two-hour morning nap did not lend itself well to the rest of our afternoon. Both boys were ornery—and honestly, so were their parents! With each hour that ticked slowly by, I felt myself mentally pushing back the arrival of an eventual third baby to this house!


One thing that did help, though, was an analogy that kept popping into my head. I read it recently in this great blog post. She writes: “I think parenting young children (and old ones, I’ve heard) is a little like climbing Mount Everest. Brave, adventurous souls try it because they’ve heard there’s magic in the climb. They try because they believe that finishing, or even attempting the climb are impressive accomplishments. They try because during the climb, if they allow themselves to pause and lift their eyes and minds from the pain and drudgery, the views are breathtaking. They try because even though it hurts and it’s hard, there are moments that make it worth the hard. These moments are so intense and unique that many people who reach the top start planning, almost immediately, to climb again. Even though any climber will tell you that  most of the climb is treacherous, exhausting, killer. That they literally cried most of the way up.”


There ARE moments that are worth the hard. Today may not have been filled with them, but they’ll come again. Hopefully as soon as tomorrow.